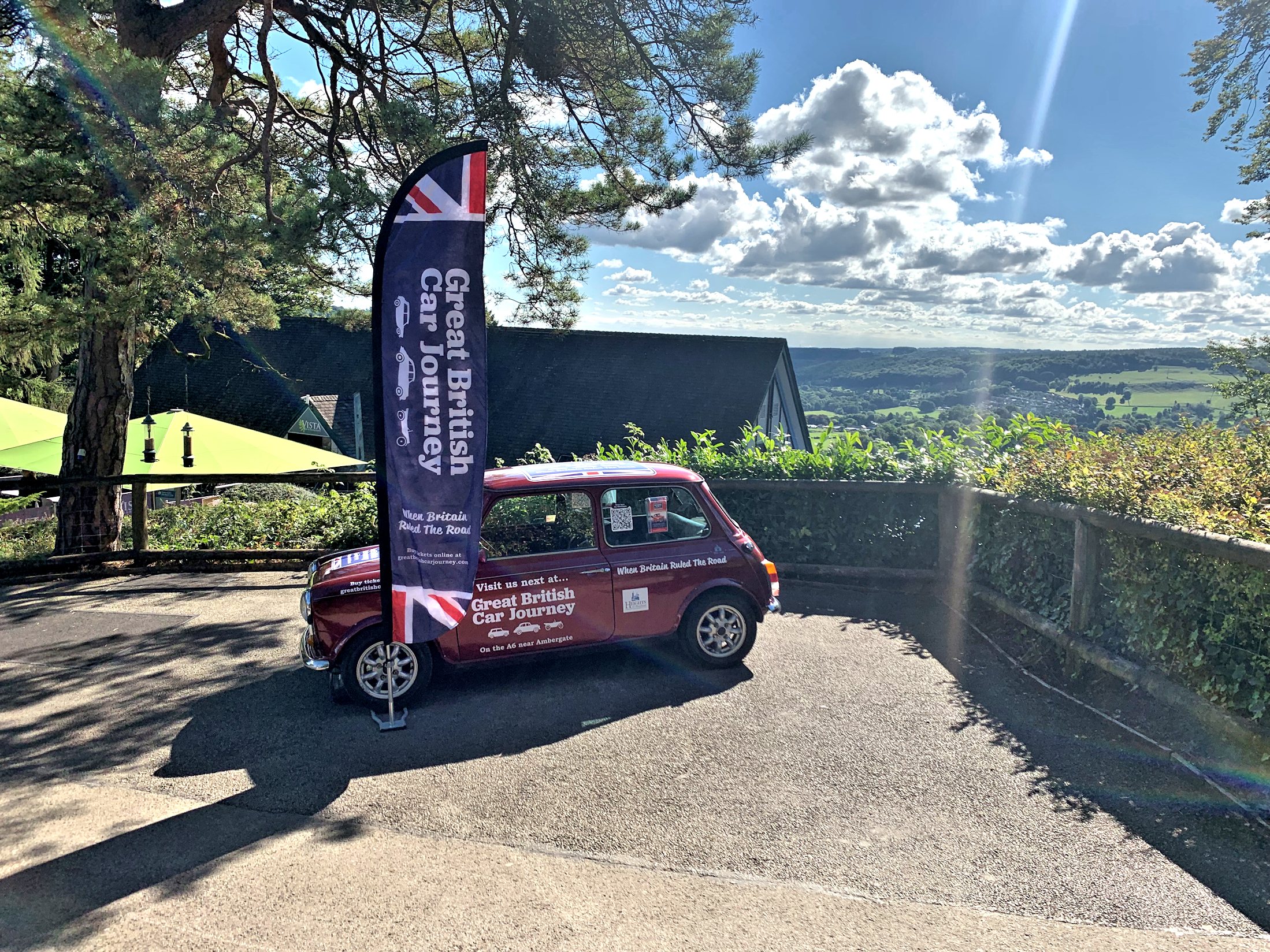 A classic 1989 Mini can now be found atop the Heights of Abraham !

Visitors to Matlock Bath’s Heights of Abraham are set for a surprise when they alight the cable car at the top of the 60-acre Hilltop Estate. They’ll be greeted by a classic 1989 Mini!

The Mini has been lent to Derbyshire’s oldest tourist attraction by Derbyshire’s newest one, Great British Car Journey, which opened in May earlier this year.

Getting to the top of the Heights of Abraham was no mean feat for the 31-year-old car, which faced a half mile climb to reach the summit which is 1000 feet above sea level.

Rupert Pugh, Director of the Heights of Abraham, drove the car to the summit himself, negotiating the steep, narrow paths and tricky hairpin bends that wrap around Masson Hill. One slip and the car could have ended up back down the hill!

The branded 30th Anniversary edition Mini, which promotes the classic car attraction in Ambergate, will now greet visitors to the hilltop attraction. Visitors to the Heights of Abraham will also get discounted entry to Great British Car Journey.

Rupert commented: “I had a great deal of fun acquainting myself with the Mini. Initially I was rather sceptical that it could make the climb, but it surprised and delighted me on the journey up to the summit. It’s already proving a real talking point with visitors with many asking how we got it up here.”

The classic Mini was produced by the British Motor Corporation (BMC) and its successors from 1959 until 2000 and is considered one of the most influential cars of the twentieth centuries. Despite 5.3 million original Minis being produced, today just 8,176 exist in the world.

Great British Car Journey boasts seven original Minis in its collection, including a rare unregistered Mini with just 12 miles on the clock. For people keen to take one for a drive, Great British Car Journey also offers a 20-minute Drive Dad’s Car driving experience in four Minis, including a 1966 Mini 850 MK1, and a Mini Cooper which was manufactured in 2000 and one of the last Minis ever made.

Alongside Minis, visitors to Great British Car Journey will find a collection of 130 popular cars designed and manufactured in the UK between 1920 and 2000, including the Austin Seven, Morris Minor, Ford Escort and Vauxhall Chevette – cars that were all produced in their millions and were on virtually every street and carpark in Britain but have since all but disappeared from the roads.